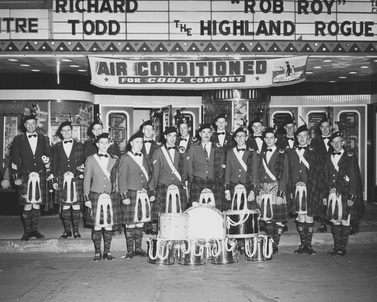 A More Complete Profile of THE Pipes & Drums of Thunder (summarized by band chieftain, Rod MacLennan)

The Band membership over the years, has changed from adult Scottish New-Canadian to a cosmopolitan group of varied age and ethnic background.Members of the Pipes and Drums of Thunder Bay (formerly The City of Fort William Pipe Band) have served in two World Wars, and have proudly represented and brought fame to Northwestern Ontario in Great Britain, the United States, Manitoba, Alberta and Southern Ontario.

During a 1967 tour of Scotland the Band played before Her Majesty Queen Elizabeth in Fort William, Scotland, on the occasion of her visit to open a new pulp and paper mill. The Band placed third in the open marching Band competitions in the World Championship Games, Dunoon, Scotland in August of 1967.

The new name was coincident with a change of uniform style from civilian, to a smart new military dress complete with feather bonnets <rest is undecipherable>In July of 1970, the Band competed for the first time in Grade One competition at Selkirk Manitoba, placing second in three classes of competition.

In one of the many firsts for the Band, they performed in the January 1st, 1972 Pasadena Tournament of Roses Parade that marked the first appearance of a Pipe Band in recent history at this event and established a new standard whereby a Pipe Band is now considered necessary to 'complete' this parade.

In August of 1972 the Band competed in the Scottish World Festival and performed in The Canadian National Exhibition Grandstand Show in Toronto, Ontario.

The Band was invited to, and won first prize for marching units, in the 1973 Calgary Stampede Parade. They also performed in the July 9th, 1973 Grandstand Show at the Stampede.

In March 1976, The Pipes and Drums were selected as the official Band for the opening and closing ceremonies for the Air Canada Silver Broom World Curling Championships held in Duluth, Minnesota; the Band on their professionalism and excellent performances received many comments.

In 1982, the citizens of Thunder Bay were very proud of the Al Hackner curling rink and The Pipes and Drums of Thunder Bay were active in piping the team off to the Brier and home again as Canadian Champions. The Band participated in fund raising efforts to help the Hackner Rink on their trip to the Air Canada Silver Broom and met the World Curling Champions on their arrival in Thunder Bay and piped them into a civic reception of unprecedented size.

The same year, the Band represented the City of Thunder Bay in the Minneapolis Aquatennial Parade which is one of the five largest annual parades in the world.

On four occasions during the last few years, The Pipes and Drums have provided entertainment at the Lake Superior Regiment Military Ball, which is one of the social highlights in Thunder Bay. In 1983, the Mexican Ambassador to Canada was the special guest at the Ball and The Pipes and Drums were asked to perform a concert in his honour.

In the summer of 1983, the Band received special invitations to participate in the 75th Anniversary celebrations of the towns of Marble and Gilbert, and the 90th Anniversary of the town of Hibbing, three communities in the Iron Range area of Minnesota. While in Hibbing, the Band won first prize in their division of the parade, and in a special ceremony were presented with a 6x9 foot American Flag that had been flown over the Washington Capital. The Honourable L. Oberstar, member of Congress, arranged the presentation.

In 1984 The Pipes and Drums of Thunder Bay were chosen, for an unprecedented second time, as feature Band for the Duluth-Superior Air Canada Silver Broom World Curling Championships. The Band was featured in both the opening and closing ceremonies, and during the course of the week, performed 46 concerts welcoming curlers to Duluth, at various official events and parties, and at special school assemblies where they entertained and explained the origin of the instruments and uniforms.

The foregoing is a list of the highlights of the accomplishments of The Pipes and Drums of Thunder Bay and does not include the many trips to communities in Northwestern Ontario and throughout the Iron Range area of Minnesota to add colour and music to parades and celebrations. The members of the Band also continue to perform in all local parades and events of civic importance. Over the years, the members of the Band have carried to many people, in many areas, their message of pride in their music and their city, Thunder Bay, Ontario, Canada. 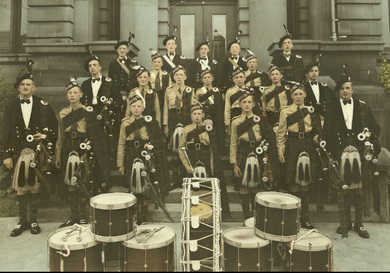